find somethin' on this blog.

lessons in terrycloth and waiting for the cable guy. While waiting for the cable guy who arrived when he said he would (first time ever!) I decided to make something with my terrycloth (also, first time ever). A few things about terry cloth: it is really messy when you cut it. My pants look like i was attacked by a fleet of molting towel monsters. The terry i got is a bit stretchy, that coupled with my thread tension made for some wonky corners that are just plain funky. So i need to sew slower and make sure it is not shifting. Also after turning the cloth, the inside seams were a bit bulky and my machine was not havin' it. But, because it is terrycloth you cannot see the thread on the back! :) it worked out somewhat, but i certainly have some tweaking to do.

My cable was fixed so i can watch my HBO and Showtime programs again. Pleased as ever with that, it got better... the cable guy took one look at my remote and laughed. He asked "where did you get that thang?" (as if it is some foreign unidentifiable artifact) "From the cable people" i say. Cable guy says "want a new one?" I say "ok" and we're back in business. There are even legible numbers on the new remote buttons, no paint, no glue, no scratches, no wierd delay. I am a little less old-school now.
Posted by erica at 12:00

I've never successfully sewn terrycloth and I'm very impressed with your success. Also, your nieces and nephew are adorable and the tablerunner is very cute.

Hey! you! I have been gone so I have missed your posts!
I use a walking foot on my machine to sew terry or chenille or flannel. You can find them at any joann's or hancocks they make universal ones...They move all fabric layers simultaneously eliminating bunching or tucking on the back. Also for quilting no stretching or shifting.Love'em. I also pin the heck out of terry !!!
Also, I use a pinking shears on my edges to break up the bulkiness. It works somewhat...
Just ideas...one sewer to the next!
Love your projects as usual!!!FUN!
Your quick!
As far as cable they would say to us...you haven't had cable for how long???!!!! Glad they finally came to someones house on time!!! Good for you!! All modern you are and what not...:):)

Hey laura. Thanks for the advice! I have a walking foot and didn't even think to use it. I will next time. As for the cable, i went years with one channel, no antenna, and the tv cable had to be wound up with a wrench clamped to the prong, set on top of the tv in a very methodical way. Then I saw some HBO and Showtime series and thought, what the heck! Go big or stay home I guess!

Hello again. Yes! go big or stay home.
Exactly my sentiments!
Plus this winter it will give you something to do during lame times. Jon and I have talked about it recently...last winter was long..Always one step ahead of the rest over here!!!:)
Talk soon!laura

I really like the combination of fabrics and the terry cloth gives it a cosy feel. well done; it looks lovely.

BTW: many thanks for visiting my blog. I had a great time in Paris but have not yet the chance to write a little post about my trip. I hope all is well with you and that the move went ok.

erica
Michigan, United States
i am a craft addict, proud and doting aunt of three, lover of fabric and handmade things.

2007-2014 by Craftyblossom
Please do not use any images or content from this website on personal blogs or websites without my consent.
Special permission is not necessary for those using Pinterest...have at it!
email: cbhandmade {at} gmail {dot} com 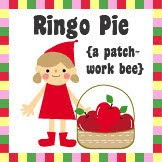